‘Back To The Future’ musical to begin performances by mid-August

The show will open at the Adelphi Theatre with a cast led by Roger Bart as Dr. Emerett Brown and Olly Dobson as Marty McFly. Directed by Tony Award winner director John Rando (Urinetown, On The Town), the production premiered in Manchester in a out-of-town tryout to excellent reviews. The company will appear this week on the BBC in a special perfomance to promote the play.

You don’t need money, don’t take fame. Don’t need no credit card to ride this train. Well, none of that might be true if you want to step into a large scale musical, but the important thing here is that one of most expected new shows in the West End is finally opening its doors in no time! Producer Colin Ingram (Ghost – The Musical) and Robert Zemeckis and Bob Gale, creators of the Back To The Future film trilogy, have just announced that the stage adaptation of their iconic sci-fi movie will at last teletransport audiences by the end of the summer.

After its out-of-town opening in Manchester to excellent reviews, the show is now jumping into the Adelphi Theatre, to bring back this retelling of Marty McFly’s teenage adventure in the time-travelling DeLorean invented by his eccentric friend, Dr Emmett Brown.“We look forward to welcoming our audience back to the theatre after so many months of being starved of live entertainment, with this heartening, hilarious story set to multi-Grammy winners Silvestri and Ballard’s fantastic new songs, alongside the original classics from the movie”, said Ingram. 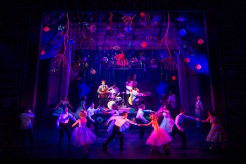 Back to the Future will start its London run on August 20th – with peformances at 7.30pm on Mondays and from Wednesdays to Saturdays, as well as Wednesday & Saturday matinees at 2.30pm and Sundays at 3pm. There will be no performances on Tuesdays except for August 24th and 31st, which will also take place at 7.30 pm. Tickets are already available and can be purchased on the following link.