The prestigious Riverside Studios will be hosting this new series of table reads, featuring creations by both veteran and first-time authors. The productions, which will be played in front of a small social-distanced audience, will be available for watching  for 28 days since its premiere, when they will be replaced by a new episode.

Just around the river bend, pass the Globe and The Tower, it’s come the shining hour… for a place where spectacle knows no end. It may be that the sets are missing. There might not be a big orchestra or a huge cast. But the experience you’re being offered is by all means a must for anyone who yearns to be called a true theatre fan. Legendary director Hugh Wooldridge presents The Riverside Reads, a series of new live productions witnessed on site by a reduced audience, but at the same time streamed online for any viewer around the world.

Taking place in the recently fully refurbished Riverside Studios (London), the initiative was first introduced last Septemebr 1st, which consisted of a table read of Carey Crim’s latest play, The Last Broadcast – featuring Sarah Alexander, Eleanor Crowe, Sandra Dickinson, Patrick Robinson and Madeleine Gray (stage directions). Every live stream will be available for 28 days, when it will be replaced by a new episode, which will premiere on the first Tuesday of every month. 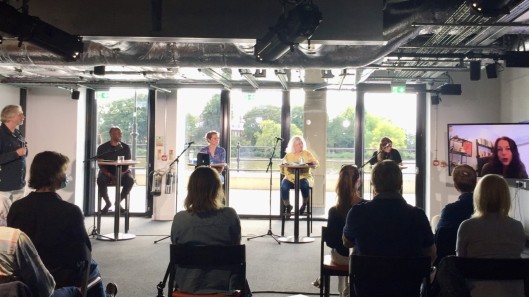 “And I really hope that someone watching sees the merits of the plays we are offering. Each of the authors are so talented and deserve a wider audience”, wrote Wooldridge on Broadway World UK. “In a time of such worldwide unhappiness in the theatre profession, it is important to me that everyone is paid. Over the past few months, people have been watching so many programmes on TV and online for free. People have got out of the habit of paying artists and technicians for their entertainment. I hope Riverside Reads may gently readdresses that. Just a few pounds or dollars for four hours’ entertainment will make all the difference to those involved”.

The next play to be performed will be Scattered, by first-time author Megan Van Dusen. Tickets and further information can be checked out on the following link.